MEIDECC’s CEO with the contestants at the prize awards occasion

On the 29th of June, the Department of Climate Change from the Ministry of MEIDECC, hosted the National Prize Awards for the Ozone2Climate Art Contest at the Basilica of St. Anthony of Padua conference room in Nukuálofa.

The art contest is an outreach program that motivates people to protect the ozone layer by promoting public support on phasing out of ozone depleting substances as well as decreasing the consumption and emission of potent green house gases. In addition, it was organized to portray the linkages between ozone layer protection and climate change mitigation.

The CEO for MEIDECC, Mr. Paula Maú awarded the prizes to the contestants. In his keynote address, he mentioned that this great way of using imagination and creativity helps inspire people to take actions on environmental issues as well as capacity building for young artists. Mr. Maú also highlighted the need for continuous collaborations between MEIDECC and its stakeholders especially in combating ozone depletion and climate change, “It is everyone’s business to protect the ozone layer, as we are all affected. Your cooperation will surely lead us in a pathway to achieve the goals of the Montreal Protocol and other related Sustainable Development Goals. ” 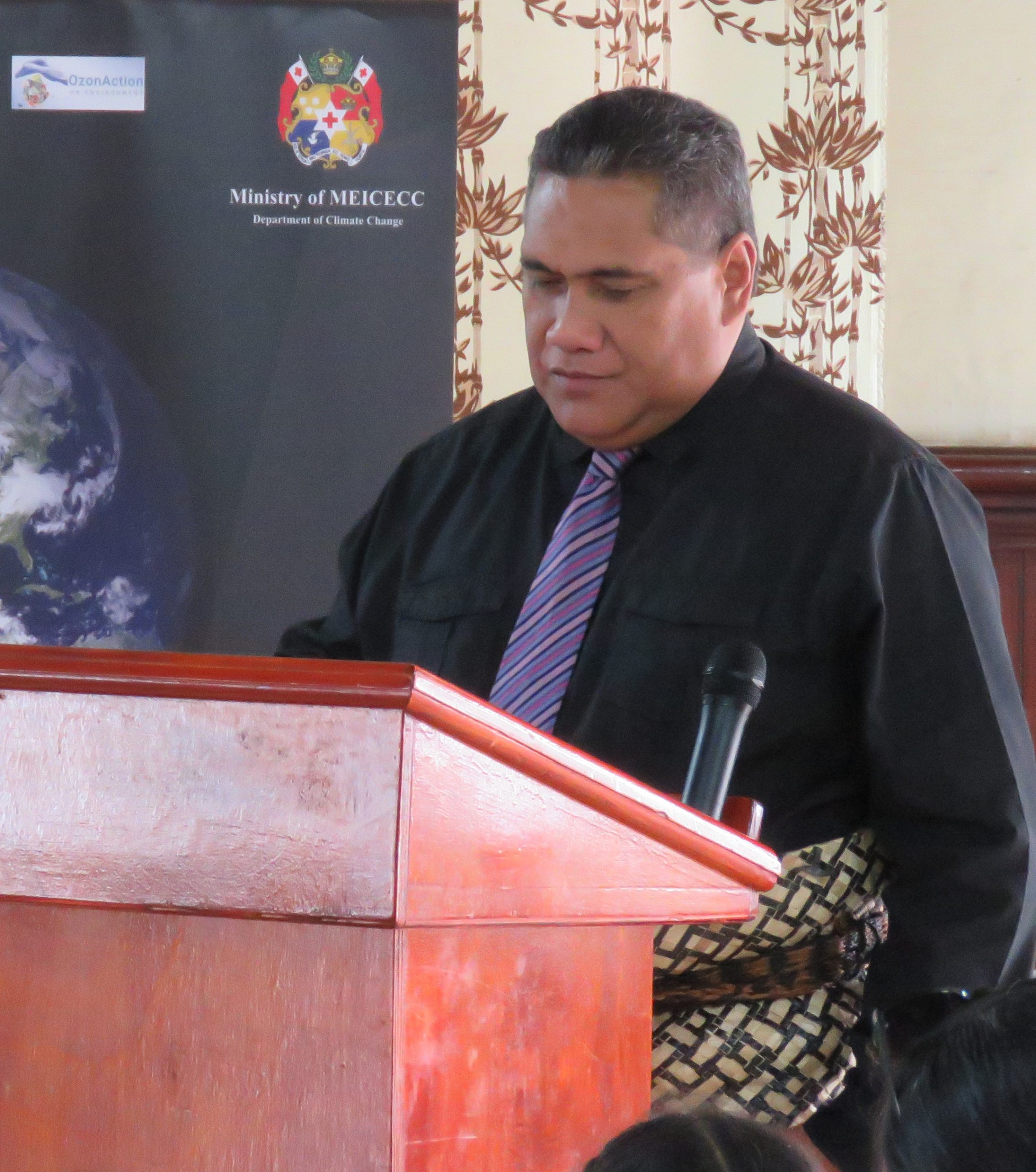 The highlight of the event was the awarding of monetary prizes to the eighteen artists who joined the competition. A moment of happiness was observed in the room as each contestant upon calling of their names proudly receives the reward of their marvelous works. The winners of each category are as follows: 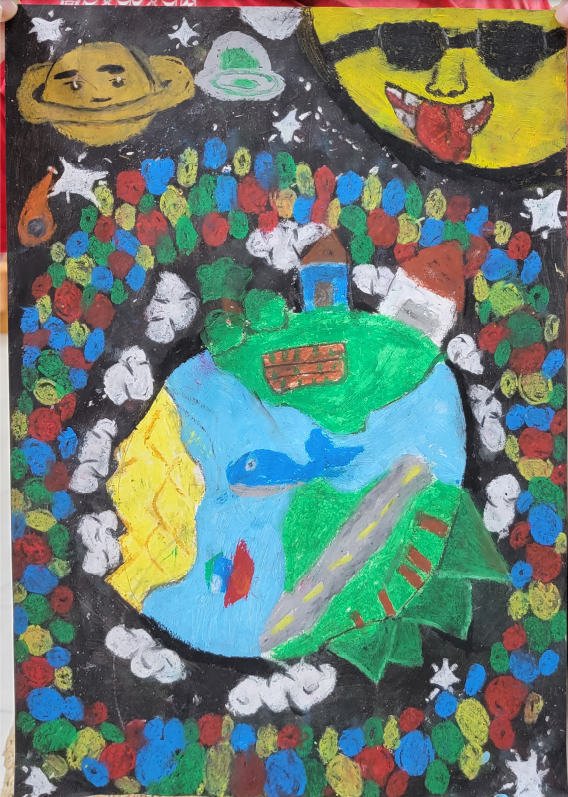 A greener earth and a healthier ozone layer is what everyone should strive for. It is important that we sustain God’s creation – I. Tuúngaá 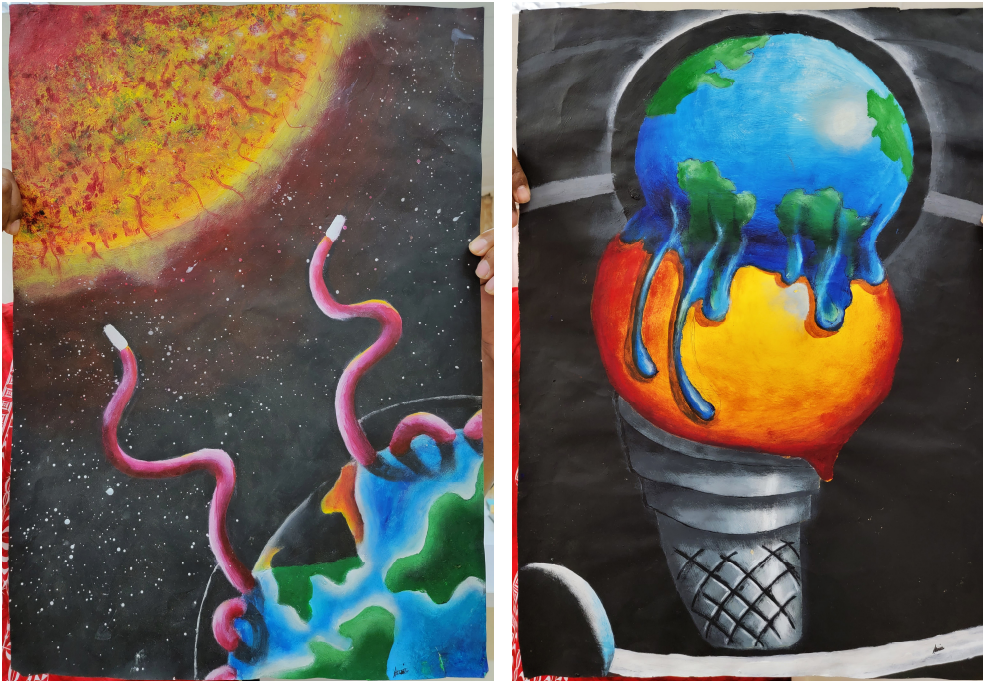 Both Pictures portray ozone depletion however in the first picture; a pink shoelace represents the ozone shield and it is being loosened up, showing the depletion of the ozone layer. As a result, more UV rays enter the surface of the earth burning it up as shown by the black coloring on the earth’s surface.  The second picture shows a double scoop ice – cream.  The second scoop is planet earth, sitting on the first scoop which is the sun. The second scoop (earth) is melting, due to intense UV radiation and global warming: a clear picture of the connections between ozone layer and climate change. Also shown in the picture are planets Mercury and Venus in their orbits – they represent the two major causes of ozone depletion which are natural and anthropogenic causes. The ice –cream symbolizes cooling systems that require fluorinated refrigerants that cause ozone depletion and also greenhouse gases that contribute to global warming and climate change. 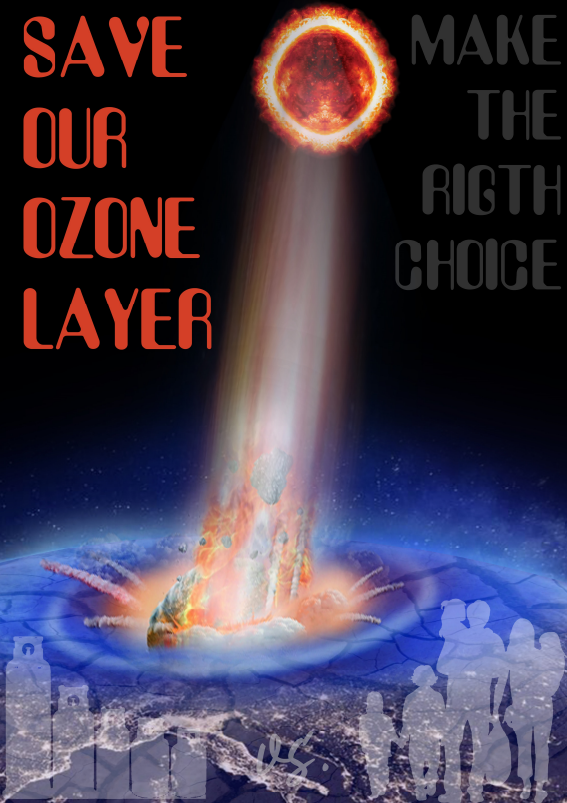 This picture shows a frightening image of earth being destroyed by powerful rays from the sun and people are trying to escape but only few survived. Also shown in the picture are faded images of refrigerant bottles, the main causes of ozone depletion. A powerful message is also highlighted – “SAVE OUR OZONE LAYER – MAKE THE RIGHT CHOICES” 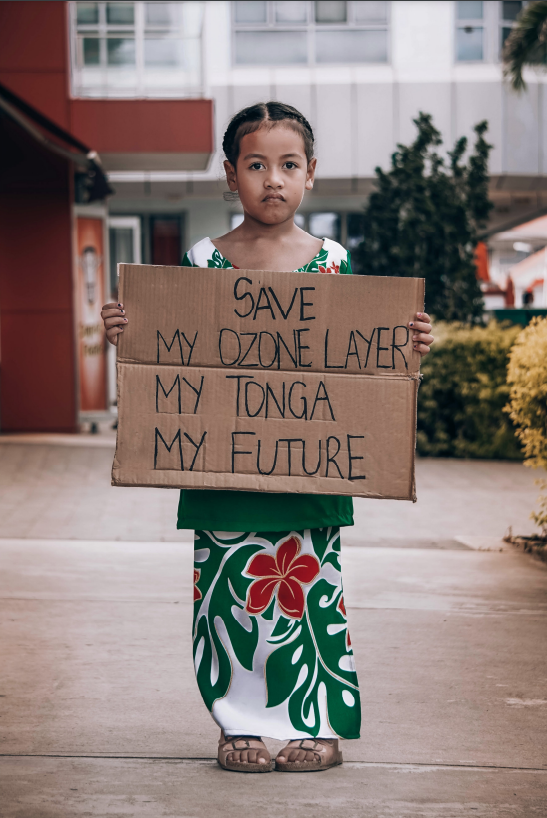 A young girl representing the vulnerable younger generations standing in the midst of modern building and developments that acquires cooling systems on a daily basis. She is holding a powerful message in her hands – a speak to the Nation to help her SAVE the Ozone Layer, Tonga, and the Future of young generations. She uses MY as a sign of possession and ownership which requires great responsibilities for sustainability.

The abovementioned artists will join other winners from 38 countries in Asia and the Pacific in the same competition but at the regional level. Their artworks will submitted to the art contest portal. The winners will be selected by UNEP with organizing partners and experts. There will also be a public voting as a contribution to the judging of the regional winners. Honorable mentioned awards will be selected and announced on the Ozone2Climate Art Contest webpage as part of the commemoration of this year’s World Ozone Day in September. 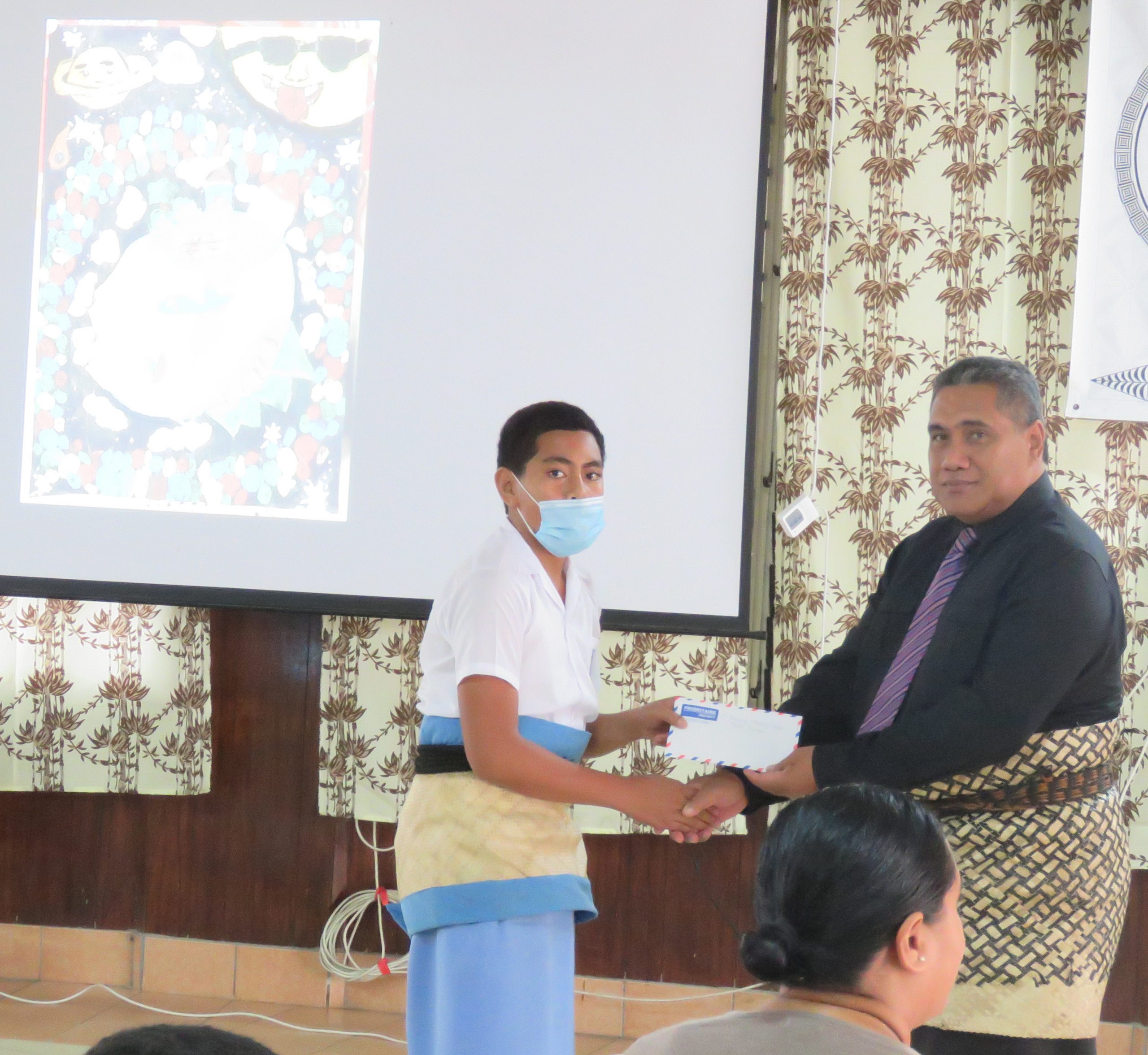 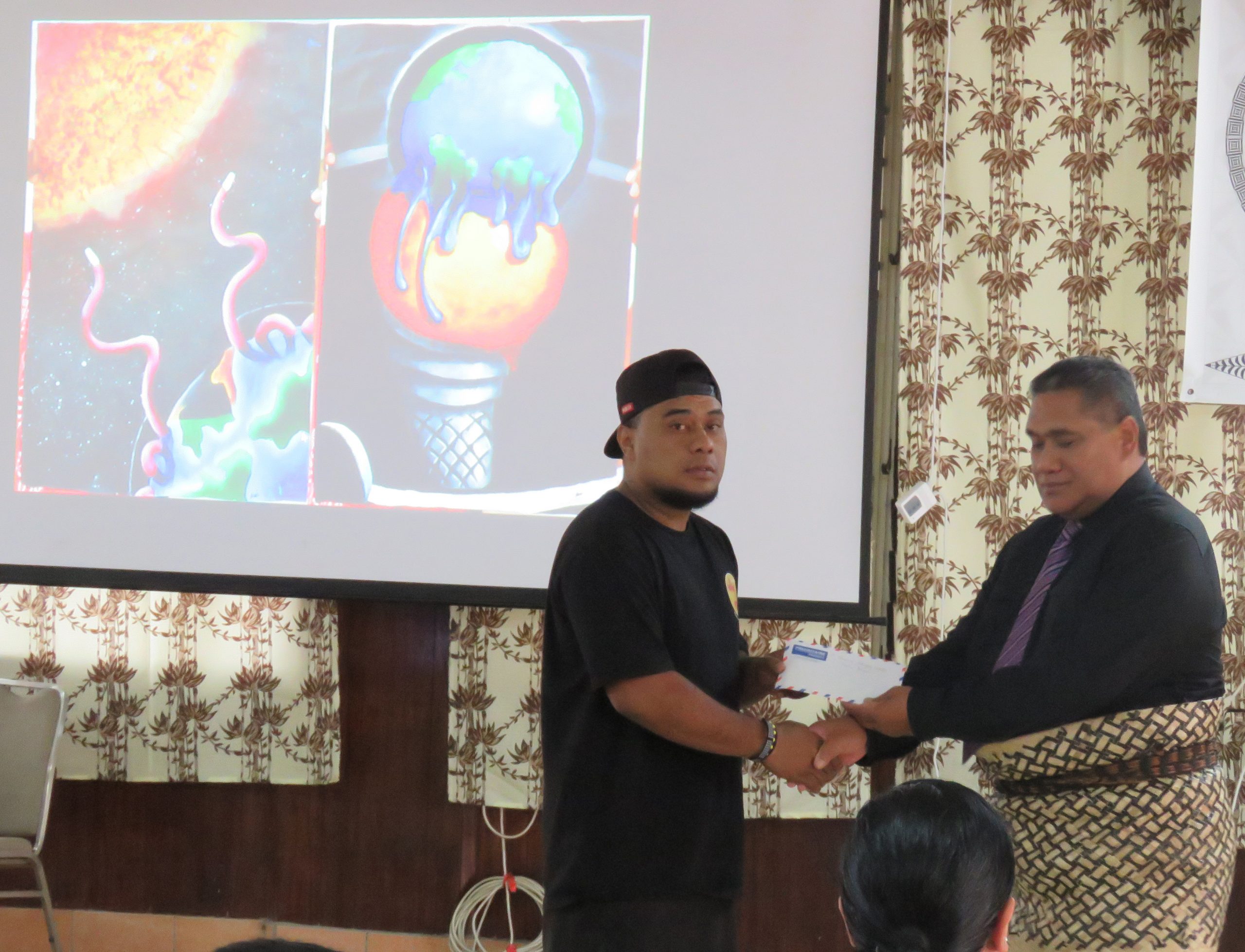 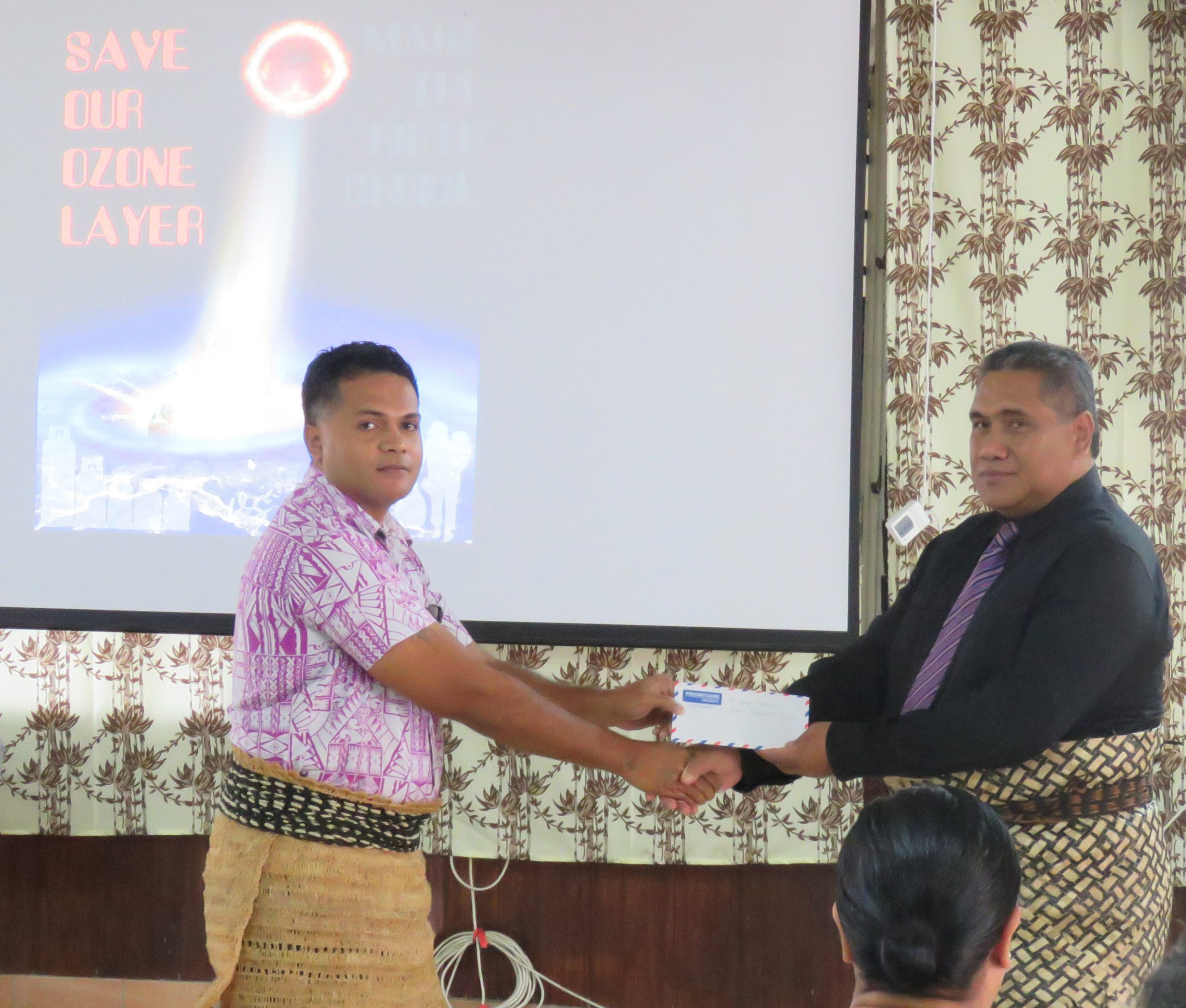 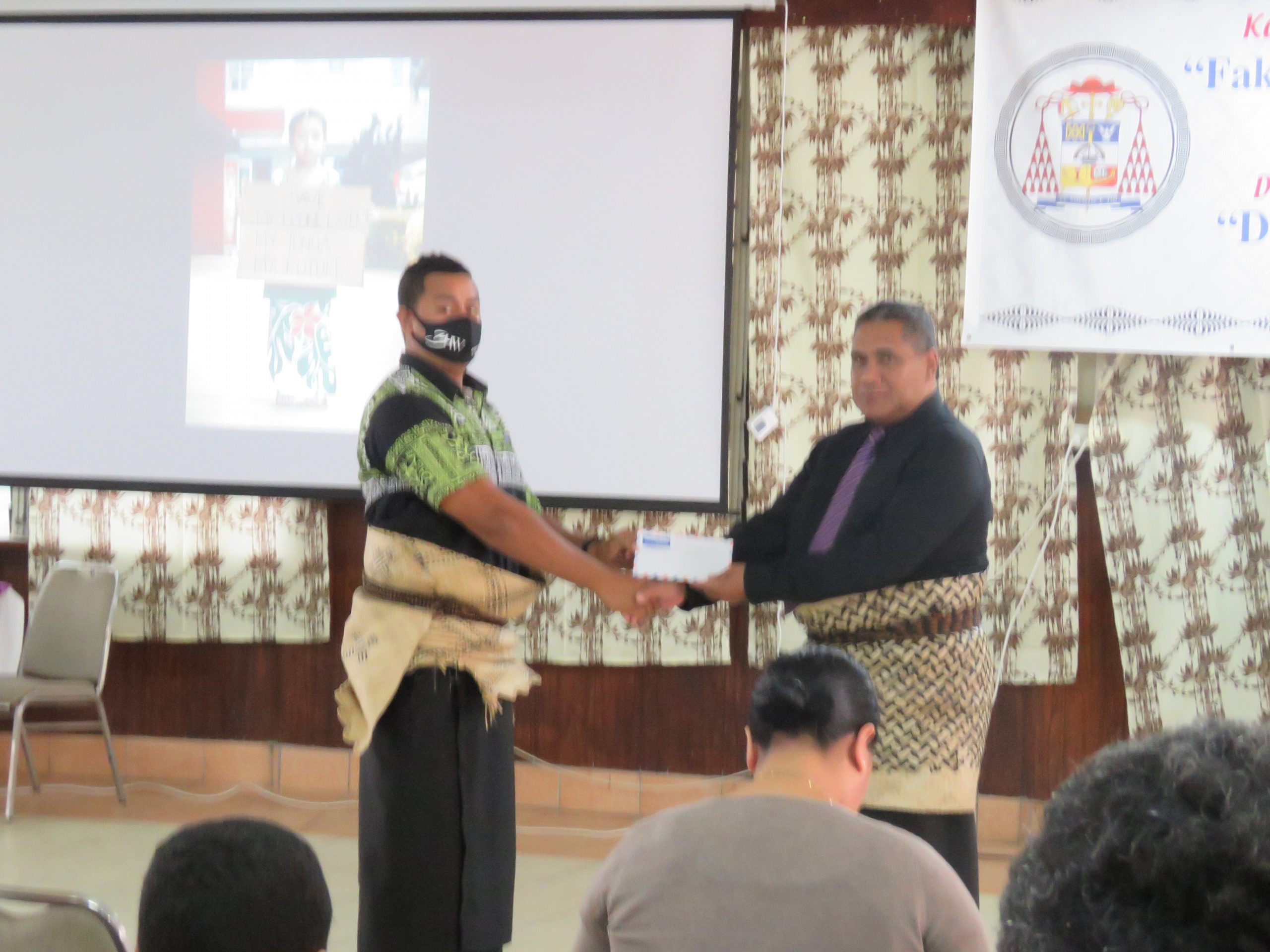