17/03/2021, The Tonga National Ozone Unit from the Ministry of MEIDECC – Department of Climate Change has conducted a half day training workshop with the inspection team and trade division from HM Customs at the “Feáo-Moe-Ngalu Conference Room”. This workshop focused on the following objectives:

Caption: Participants from Customs and Ozone Unit from the Department of Climate Change.

Mr. Áloisio Fifita from the Ozone Unit continued with a demonstration based on the current Hydrochlorofluorocarbon (HCFC) licensing system, “In order for the system to properly function, the border control and ozone team must collaborate in accordance with Customs Law and Ozone Protection Act.”

The workshop ended with a session lead by Mr. Sau Niulala, a senior officer from HM Customs emphasizing on the inspection techniques required for the combatting of smuggling and other illegal forms of HCFC trade followed by an open forum discussions on the challenges and way forward for the successful co-operations between these two government line ministries (Customs and National Ozone Unit) and the sustaining of Tonga’s Compliance with the Montreal Protocol by effective implementation of HCFC licensing system. 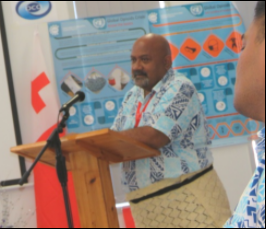 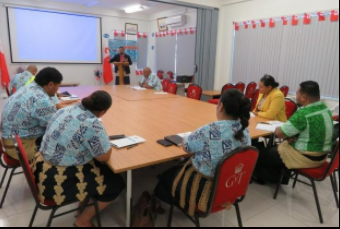 Caption: Mr. Sau Niulala from Customs and the open discussion during the training program.