21st September, 2020  Tonga Roman Catholic held a very spiritual and warm Mass Celebration to mark the beginning of a one-week national campaign regarding the importance of Climate Change and was led by the Bishop of the Diocese of Tonga and Niue, His Eminence, Soane Patita Cardinal Mafi on Sunday 20th September, 2020 at the Basilica of Saint Anthony of Padua, Nuku’alofa.

The problem of Climate Change best described the negligence of humanity towards God’s creation. People don’t mind hurting them.

Cardinal Mafi, said, when a mother is in tears it’s a big impression, no one can imagine the hurt and pain but it is the same when Mother Nature cries because of harming the creations.

“Her tears are kept on dropping like a mother,” said Cardinal Mafi.

This mass celebration was very special only because its ceremonial was dedicated to Climate Change and the theme of the week, “Building a Resilient Tonga.” Starting from its opening song, “the song was composed by the churches   Patron for Creation,” St. Francis.

He really emphasized the high risk of under development countries including Tonga to the problem of Climate Change, but, “the message today is for the people to completely understand the whole situation and know how to work together,” Cardinal’s message.

The service were joined by the High Commission of Australia, H.E Mr. Adrian Morrison, Minister of MEIDECC, Hon. Poasi Tei, Minister of Finance, Hon. Tevita Lavemaau, Minister of MAFFF, Lord Tu’ilakepa, Minister of Education and Training, Hon. Siaosi Sovaleni and other Government Officials and NGOs and the staff of MEIDECC and Department of Climate Change.

This National Awareness Week started on the 20th of September and ends on Friday the 25th September 2020. 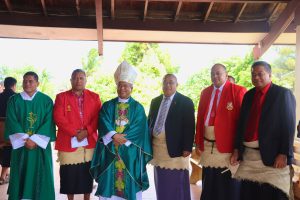 Issued by the: Department of Climate Change (MEIDECC)