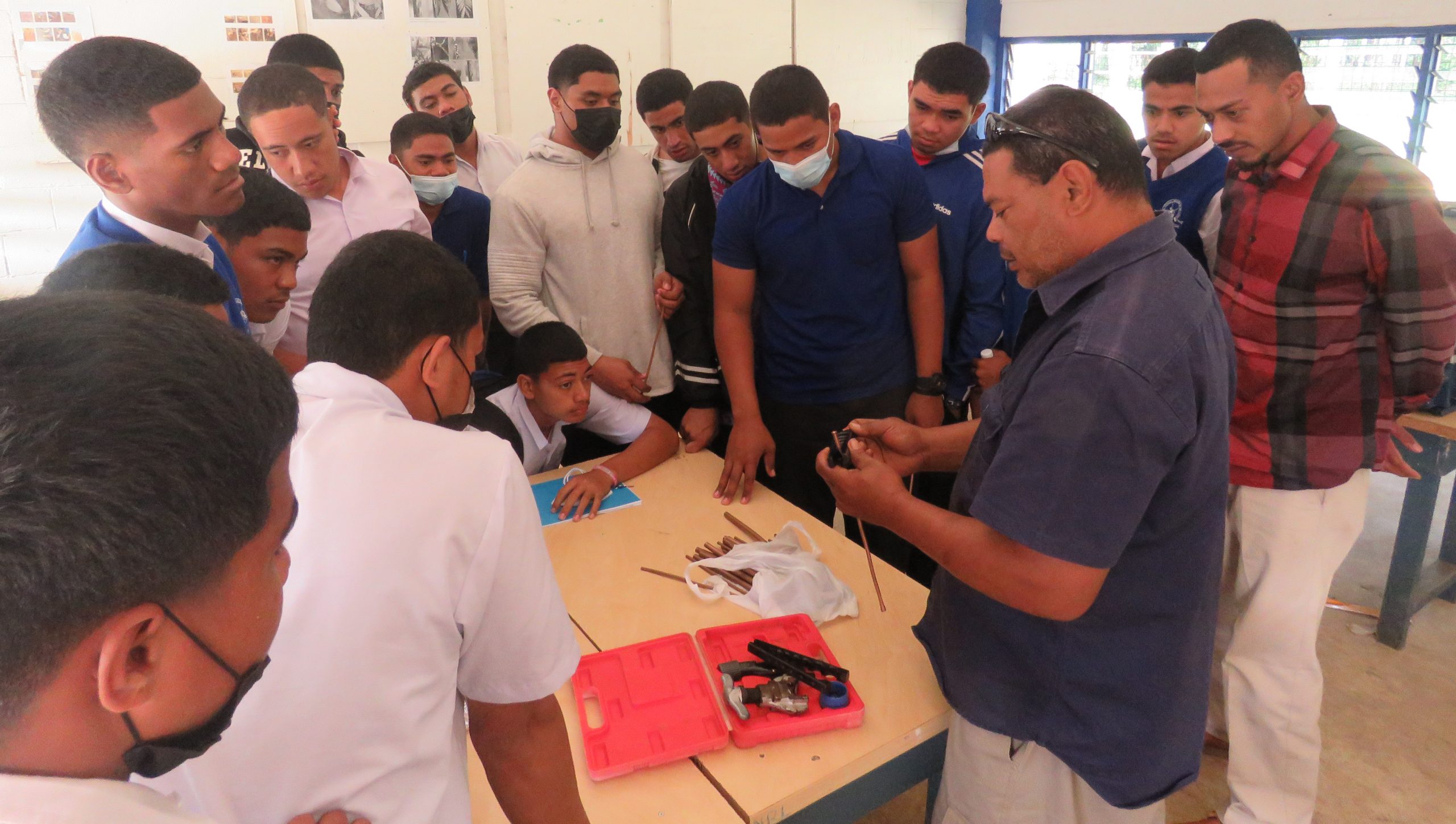 27th June, 2022 In the midst of the government’s support and cheering for the Mate Maá Tonga team, the Department of Climate Change from MEIDECC commemorates the international day for refrigeration systems with students from the TVET studies at Toloa.

The World Refrigeration Day (WRD) was announced during the plenary of the Second Global Inter – Regional and Parallel Network Meetings for National Ozone Officers in Paris on the 20th of February 2019. It takes place on the 26th of June of every year to inspire development and adoption of innovative and sustainable cooling solutions by the public that is safe and fully compliant with international treaties and safety measures. In addition, the 26th of June was selected to honor the birth date of William Thompson (1824) who was later known as Lord Kelvin, the inventor of absolute temperature international systems.

The school’s acting principal and head tutor, Rev. Tuluta Fisiíhoi welcomed both the team from climate change department as well as the staff and TVET students who attended the program. Rev. Fisiíhoi conveyed his appreciation for choosing Tupou College amongst other TVET secondary schools to be part of the WRD, 2022. He ended his welcoming remarks with encouragement to the students to make use of the opportunity as well as promoting the idea of certifying the training content by the accreditation board and to be inserted into the school’s curriculum.

Mr. Áloisio Fifita from the Department of Climate Change in his keynote address highlighted that modern life relies significantly on applications and systems of refrigeration and air-conditioning. “Nowadays it is almost impossible to find a building or facility without cooling, heating, or chilling applications,” said Mr. Fifta. He also believed that the advancements in chemistry and mechanical engineering led to the development of fluorinated refrigerants.  “As a result, the use of refrigeration and air-conditioning expanded exponentially to cover all aspects of life and in different types of building and facilities. For example: residential, commercial, industry, transport and even critical sectors of life such as health and telecommunications.”

The program continued to the awareness part, where Ms. Ánau Matele from the Ozone Unit presented on the science of the ozone layer and Mr. Fatafehi Fakatava from the Tonga Refrigeration Engineers’ Association (TREA) conducted theory and practical sessions on refrigeration systems. Mr. Fakatava covered in specific the introduction to refrigeration, tools and equipment, and handling techniques.

This year’s theme is “Cooling Matters”. The key objective is to make the public aware of cooling’s essential benefits and how climate-friendly technology choices foster the environmental well-being of future generations.