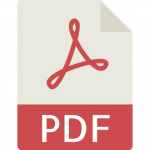 Final Consultation on the Mandatory Labeling Requirement for HCFC/HFC Refrigerants Prior to Commencing in August, 2022 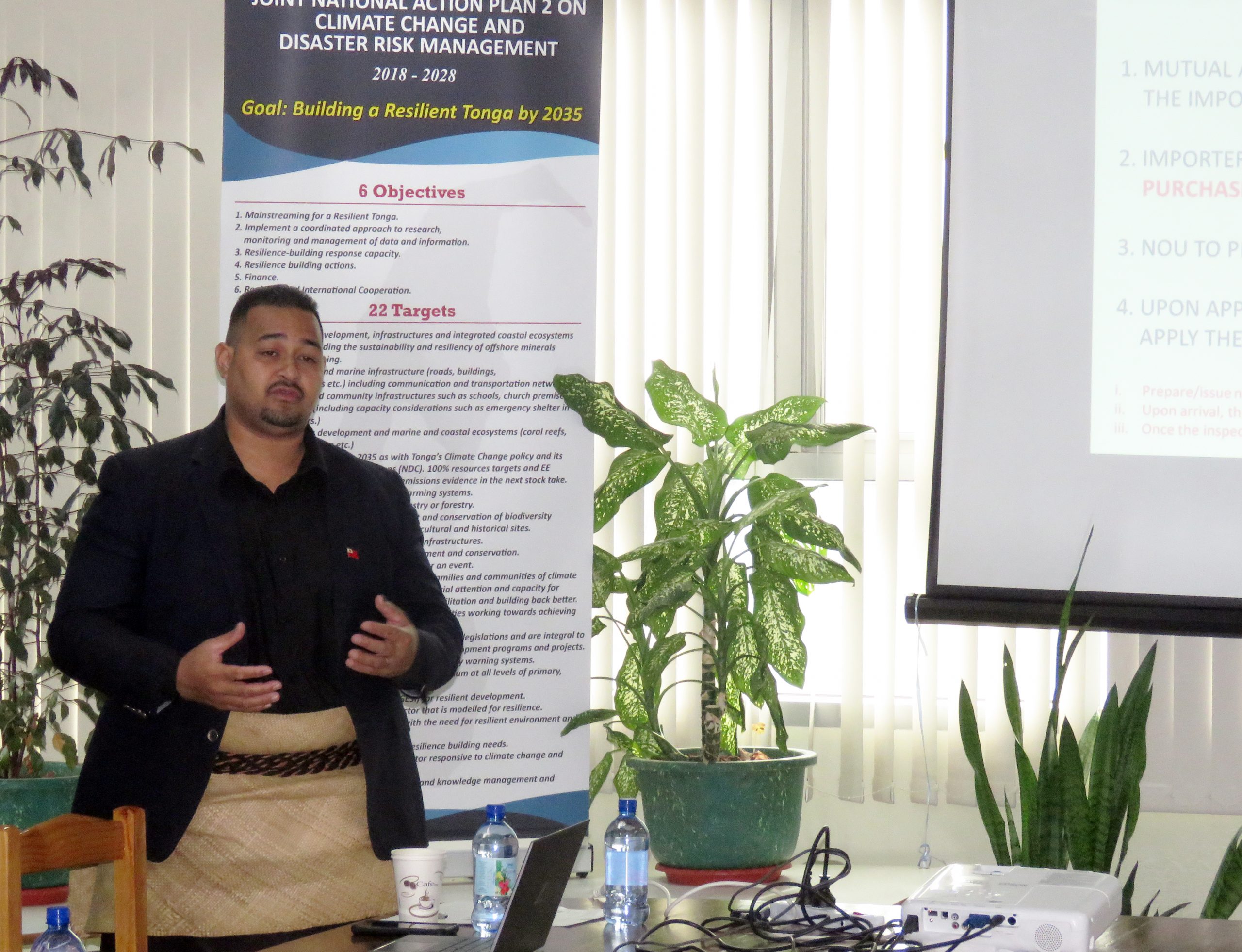 Mr.’Aloisio Fifita in his presentation

On the 11thof July 2022, the Government of Tonga through MEIDECC’s Department of Climate Change facilitated the final consultation meeting on Mandatory Labeling Requirements for HCFC & HFC refrigerants. The meeting was led by the National Ozone Layer Protection Division, with the aim of discussing the principle mechanisms and approaches to successfully implement the labeling of HCFC/HFC refrigerant bottles imported to the Kingdom. This tool is formulated to help the National Ozone Unit in monitoring of HCFC/HFC imports as well as deterring importers from illegal trade.  Joining alongside several neighboring island countries in this initiative promotes regional cooperation and sustaining compliance with the Montreal Protocol.

Representatives from relevant stakeholders and government ministries in their discussions

The meeting was filled with the fruitful discussions and concerns of the participants. Mr. Aloisio Fifita from the National Ozone Unit (NOU) reiterated the requirements for successful implementation of mandatory labeling system in Tonga. He emphasized that meeting the requirements will reduce smuggling of refrigerants and also aid consumer protection and occupational safety.  “Basically, the requirements are: applying for an import permit with all the relevant information required, and upon arrival of shipment, the NOU will be standing by customs officials during the inspection of imports for approval labeling with non-detachable stickers if inspection results are all right,” concluded Mr. Fifita.

Through UNEP, the National Ozone Layer Protection Unit will ensure all procedures are completed prior to commencing of labeling in August this year as well as the continuous joint collaborations with stakeholders to prevent future attempts to harm our Ozone Layer.

Continuing the momentum of ‘Outer Islands – Private Sector Forum on the Green Climate Fund’, the Department of Climate Change of the Ministry of MEIDECC – Tonga’s National Designated Authority (NDA) supporting office to the Green Climate Fund (GCF) – through ongoing partnership with the Tonga Chamber of Commerce & Industry (TCCI) held a second session at Pangai, Ha’apai. The aim: to sensitize micro, small and medium-sized enterprises (MSMEs) to accessing climate financing for resilience building. The discussions were facilitated by the GCF-supported Private Sector Readiness Programme Management Unit (PMU) in close coordination with the NDA Readiness Unit. 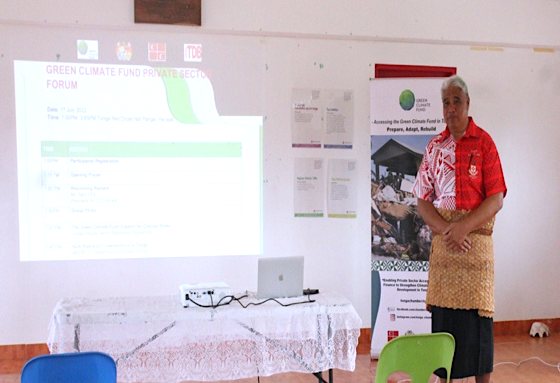 TCCI President Mr. Sam Vea, welcomed Ha’apai’s business owners, both formal and informal, across various sectors including energy, livestock, tourism, transportation as well as the media, to work together to identify and prioritize solutions to the problems their enterprises face due to climate change. 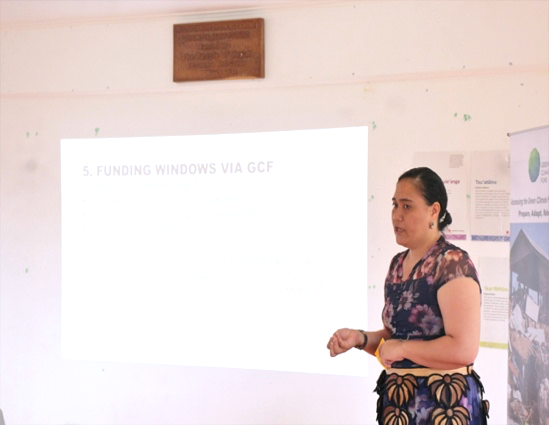 Ms. Malini Teulilo, Project Development Officer, elaborated on the GCF’s MSME Pilot Programme with the objective to promote a paradigm shift towards low-emission and climate-resilient development where about a USD 100 million contribution is allocated to least developed countries and small island developing states of the Pacific. Ms. Teulilo highlighted that the program recognises the diversity of MSME conditions in various regions, countries, and sectors and that is why it is important that project ideas are first and foremost ‘country-driven’ especially for Ha’apai, being somewhat similar to other outer island groups. 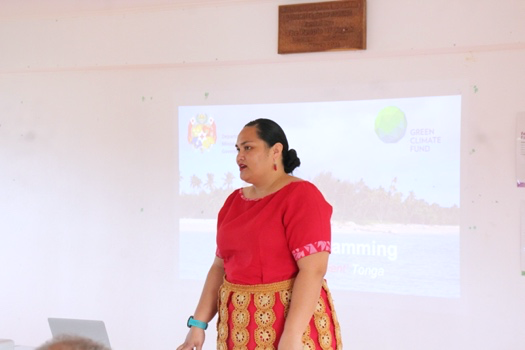 NDA National Coordinator Ms. Elizabeth ‘Akau’ola presented on the Country Programming process of accessing funds from the GCF, as well as the current and expected interventions to improve food security within the fisheries and agriculture sectors and enhance community resilience by leveraging climate change funding at the subnational level. Ms. ‘Akau’ola emphasized that in the process of coming up with project ideas, it is very important to identify and make the link between climate change and the impacts, to eliminate the common mistake of identifying natural hazards as also caused by human-induced climate variability. 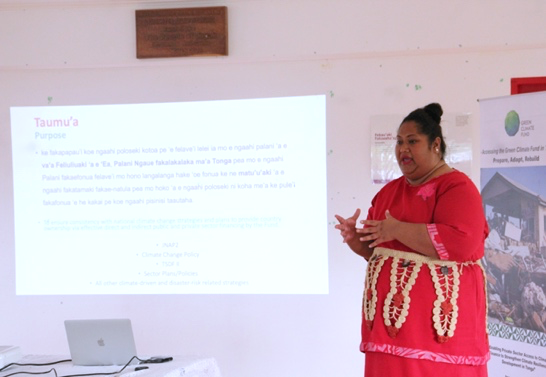 Ms. Frances Satini, Climate Change Policy Officer, also explained the NDA’s ‘No Objection Procedure,’ a national process for the proper channelling of project ideas through the right authorities, including engaging the accredited entities to assist with the development of quality concept notes and proposals to be submitted to the GCF. She stretched the importance for every project proponent to attain a ‘No Objection Letter’ from the NDA focal point, CEO for MEIDECC Mr. Paula Ma’u, to assist the project in the submission and to make sure the project is aligned with national climate change strategies and plans that will promote country ownership. 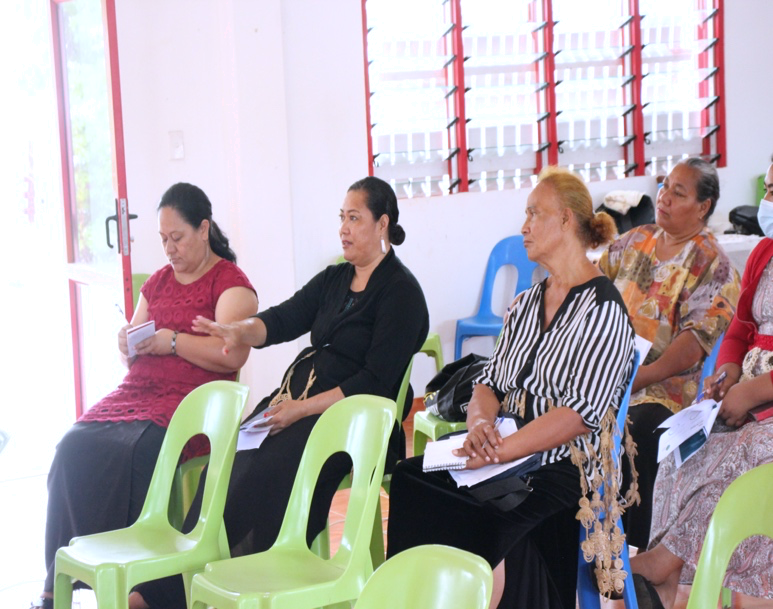 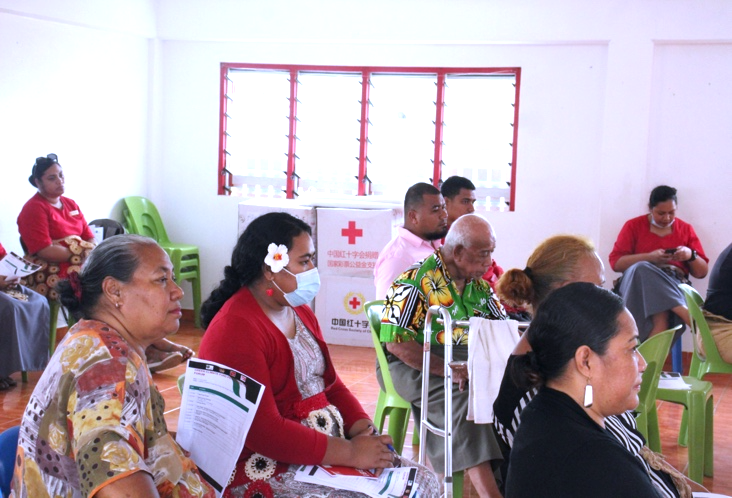 Ideas were suggested such as fully switching the electricity supply to solar power, using electric scooters rather than driving fueled cars, turning manure waste into renewable energy, and the main adaptation issue of course is protecting their coast lines from being eroded by sea-level rise. 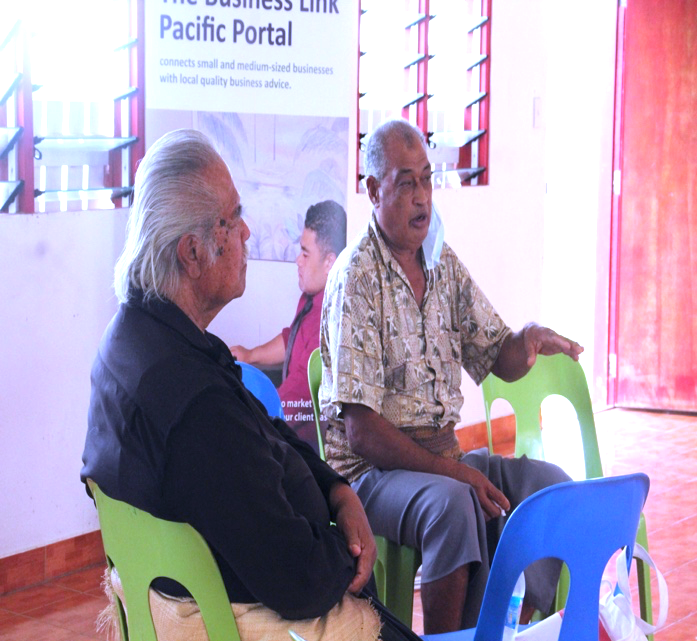 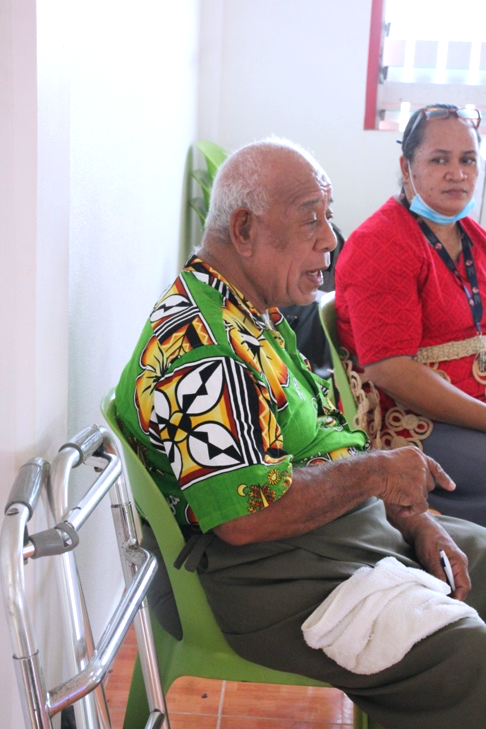 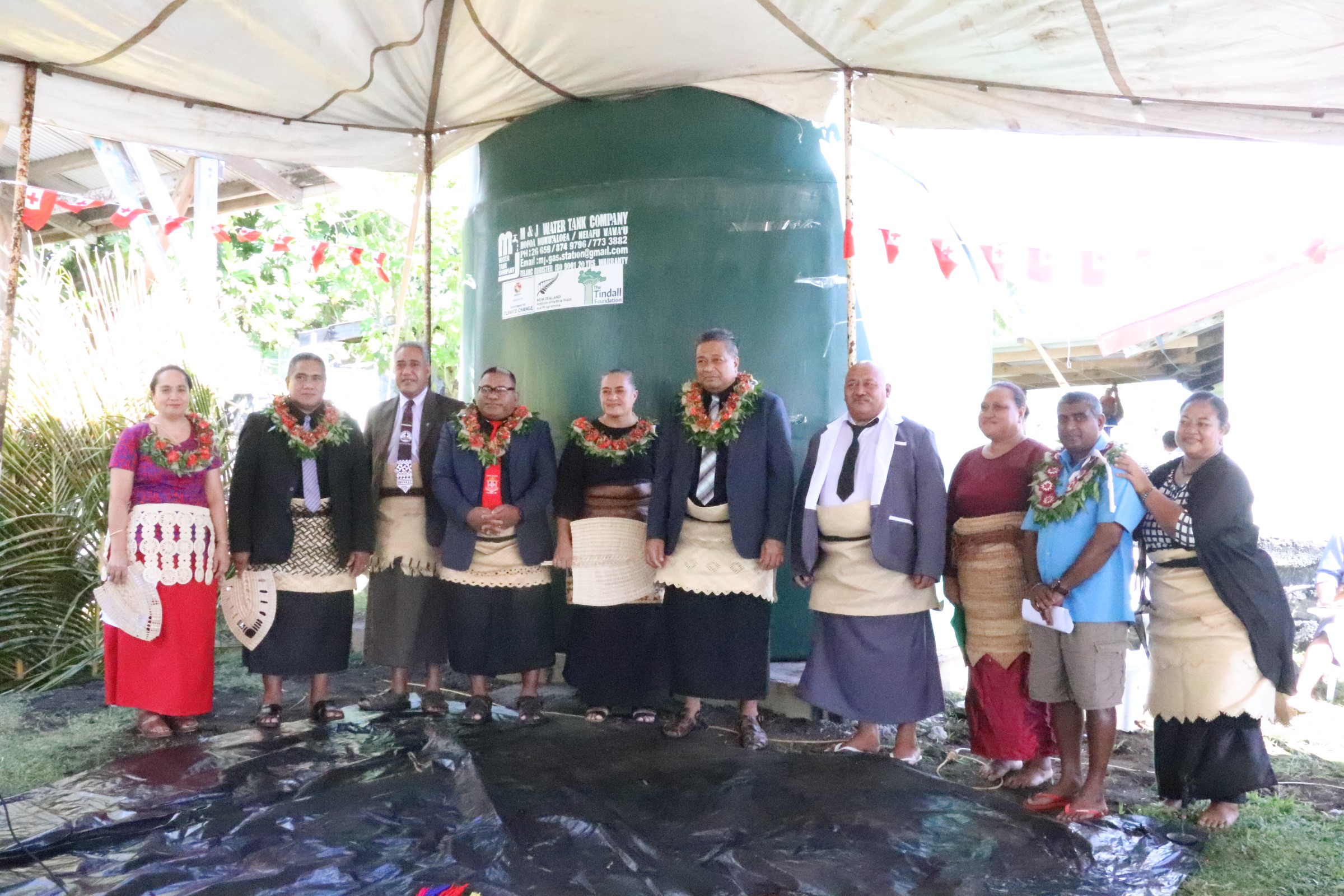 The NWTP has been co-funded by New Zealand’s Ministry of Foreign Affairs and Trade and the Tindall Foundation worth NZ$565,000. The island of Niuafo’ou has benefited from a total of 168 water tanks, which are then distributed to a total of 9 communities, 3 Government schools, and government buildings. 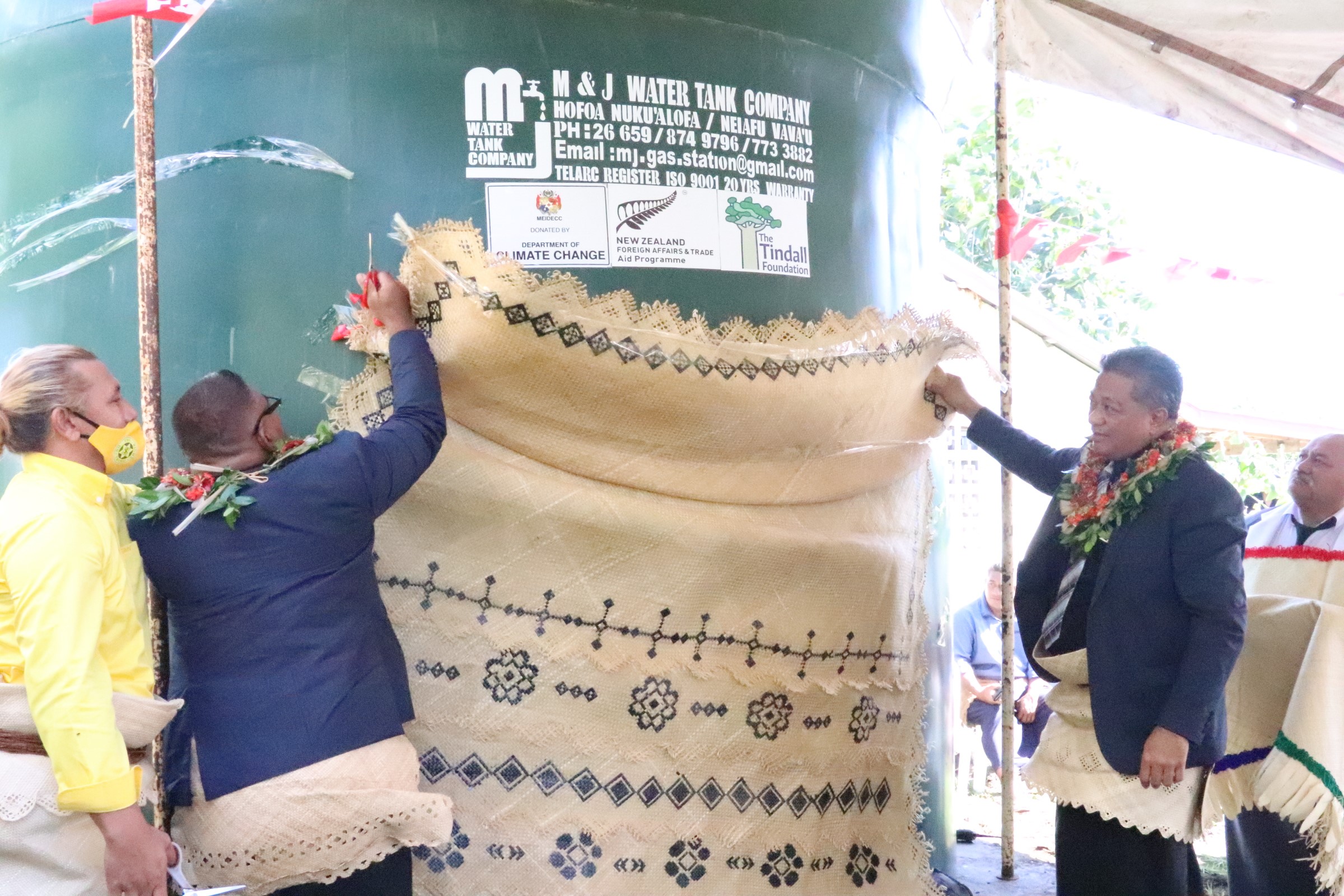 The Government representative of Niuafo’ou, Mr. Bob Taylor extended a warm welcome to the Guest of Honour, Hon. Poasi Mataele Tei and its delegation team.

“On behalf of all the Niuafo’ou from the farthest island, also known as the Tin Can Mail we humbly welcome the Guest of Honour and his delegations from Tongatapu” 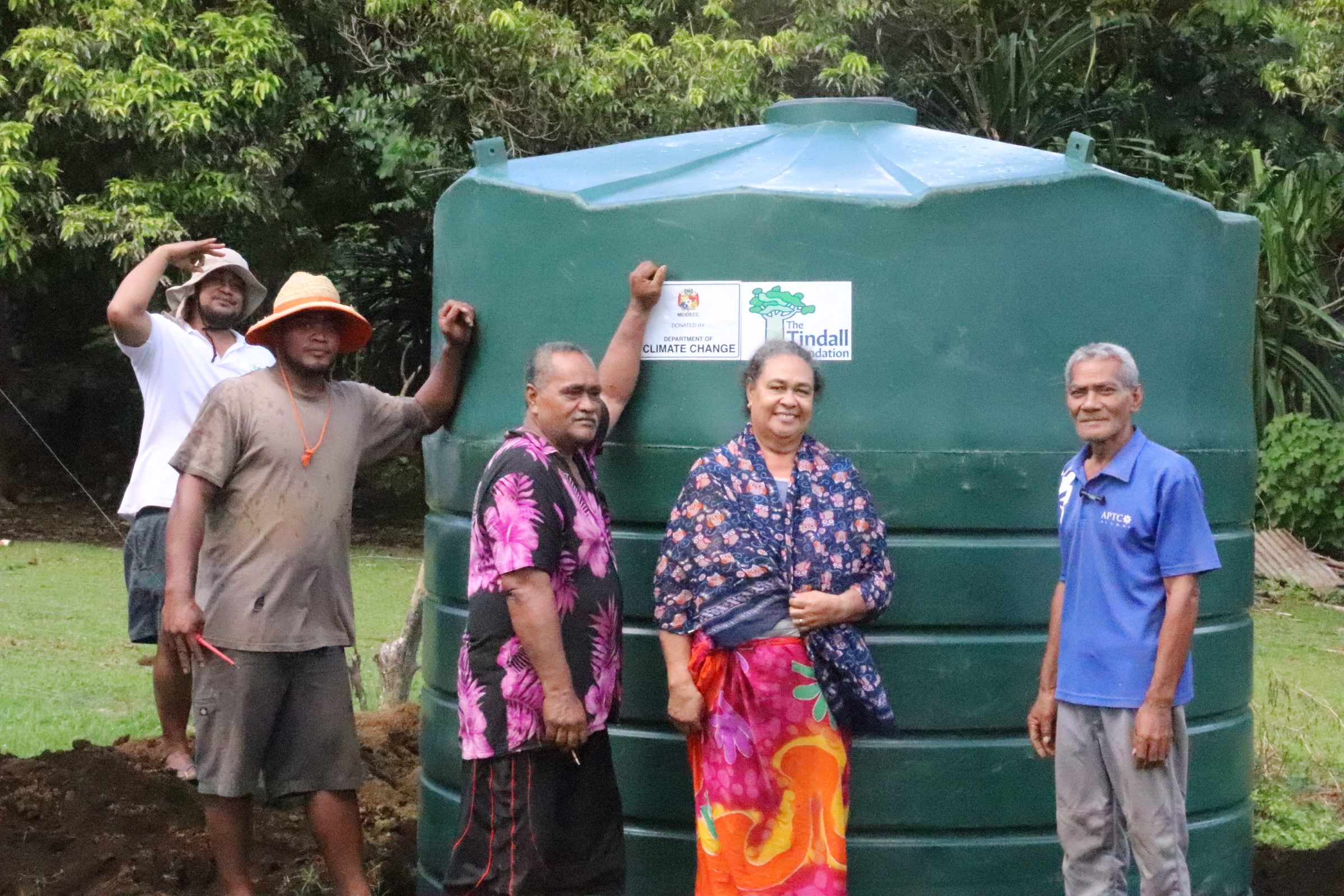 Water tank installed at the Free Church of Tonga in Tongamama’o with Rev. Tei ‘Utumoengalu standing third from left and Rev. Hika Lavalu.

“To solve the problem with Niuafo’ou facing with water shortages due to climate change we express our sincere gratitude to the Government of New Zealand and Tindall Foundation for their support”, mentioned the DPM, Hon. Poasi Tei.

The Principal of Niuafo’ou High School, Ms. Losaline Taufalele also thanked H.E Matt Howell, New Zealand High Commissioner to Tonga for their country’s generosity through your Office and MEIDECC reached out in a form of water tanks. 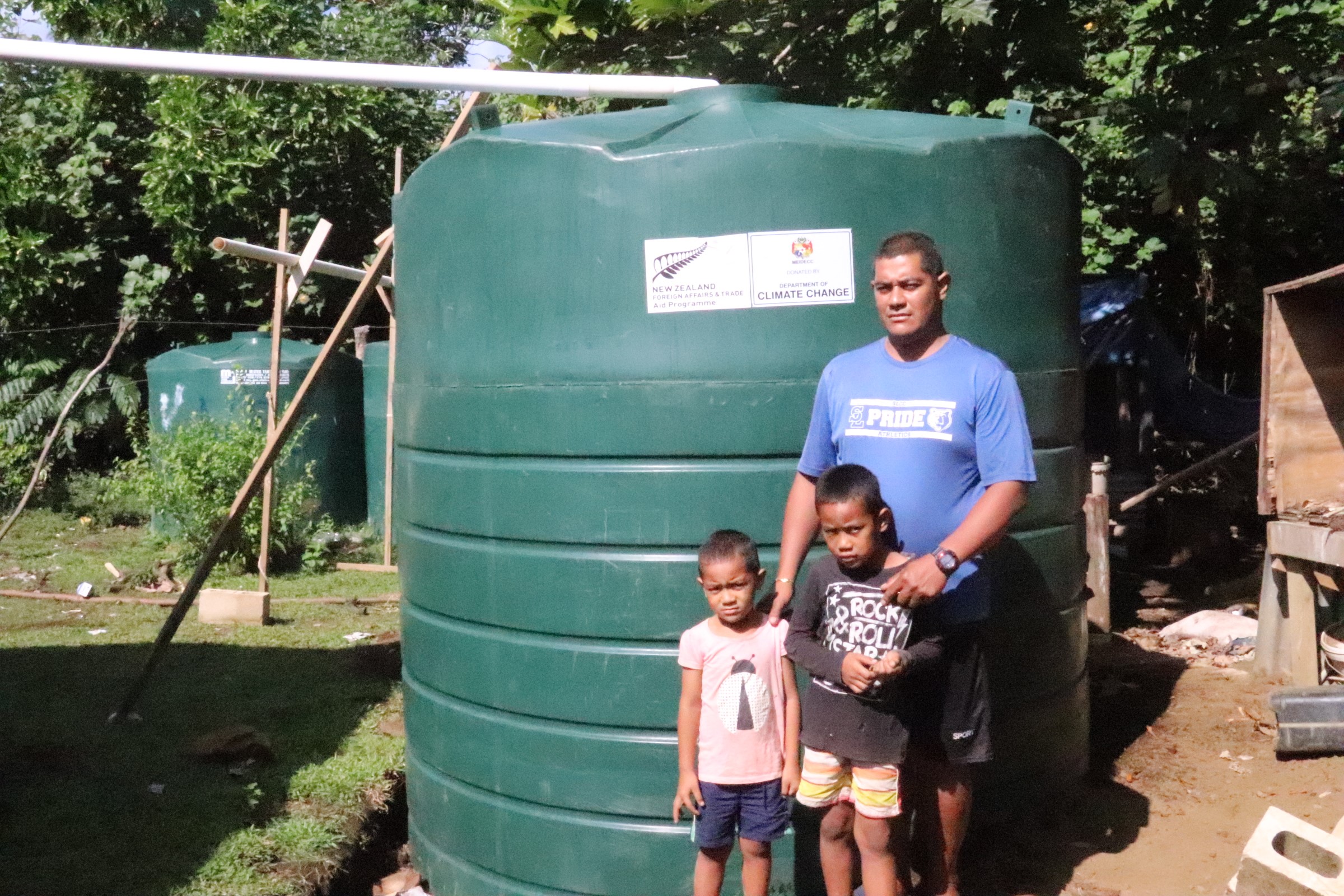 Town Officer in Mu’a, Mr. Tevita Taufa’ao with his two sons after the installation of their water tank.

“Your Excellency’s words itself are limited to express how deeply grateful we are as what seems like a dream is becoming a reality.”

The people of Niuafo’ou are very vulnerable to drought and in addition to their isolation from the main island and the provision of core services by the government. Giving them the chance to access clean drinking water. The water tank project has been a step forward in the development of this island group.

The Water tanks project was launched in a ceremony at Government House. The Ministry of MEIDECC’s Department of Climate continues to seek more projects to facilitate the needs of the Niuafo’ou people.