On the 10th November 2021, in Glasgow, Scotland, United Kingdom, Her Excellency, Honourable Titilupe Fanetupouvava’u Tu’ivakano, Tonga’s High Commissioner to the United Kingdom and Head of Tonga Delegation, delivered the national statement on behalf of Kingdom of the Government of Tonga to the United Nation’s Framework Convention on Climate Change – 26th Conference of the Parties (COP26). 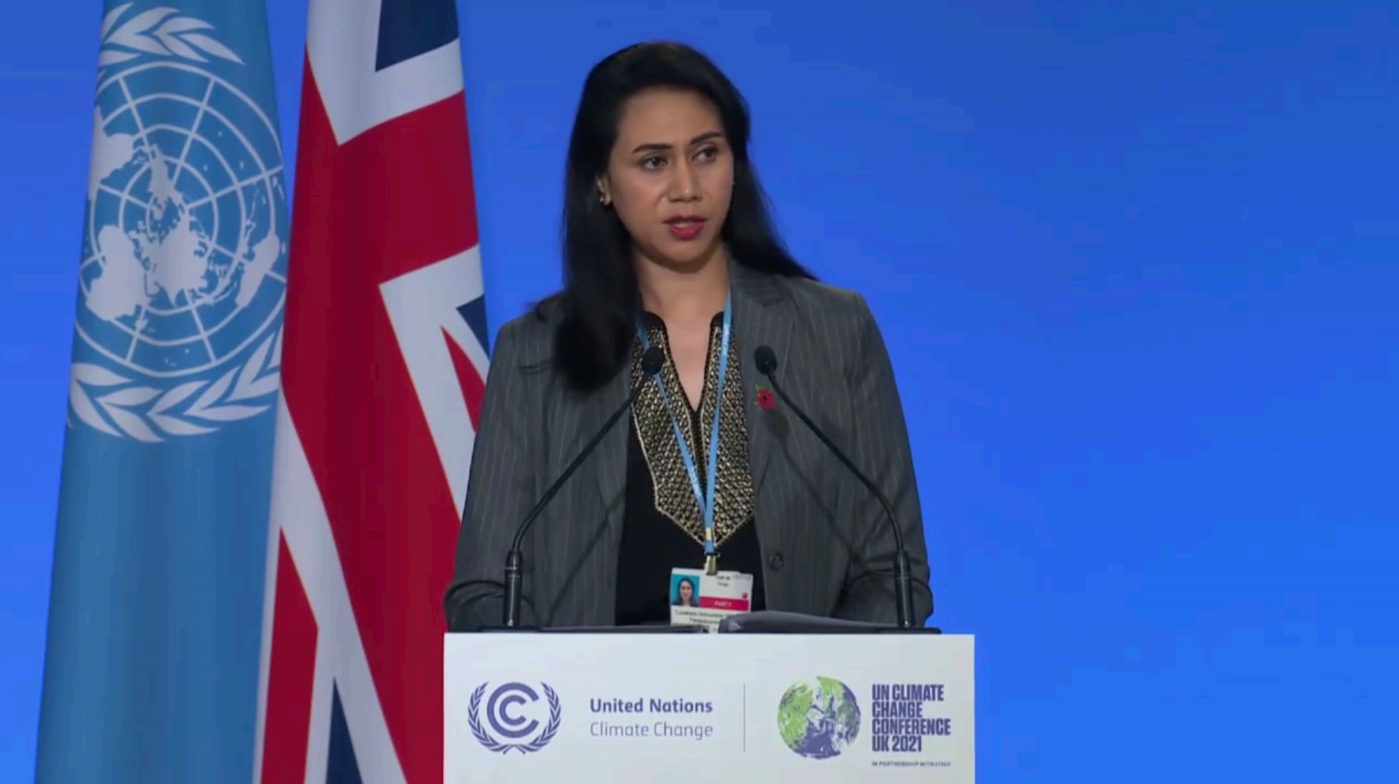 In her address, she spoke of the impacts of Climate Change in Tonga such as the increased intensity of tropical cyclones, sea-level rise, coastal erosion and saltwater intrusion into groundwater as well as droughts leading to water scarcity especially the outer islands where rainwater is the only source of water. She gave a special statement about the ‘deep concern’ of the Pacific Island Countries over the increased acidification of the Pacific Ocean.

Her Excellency strongly emphasized the importance of limiting the global temperature increase to 1.50C by the end of the century. According to the NDC Synthesis Report and the UNEP Emissions Gap Report issued in September and October 2021, the global temperatures are unfortunately still on the path of going beyond 1.5 degrees goal which would be catastrophic to Tonga, the Pacific and Small Island Developing States. However, as stated by the IPCC Report in her address, this temperature target goal is still within reach.

To meet this temperature target goal, in her speech she encouraged all countries to work together and take enhanced actions now: “We will persist to call on everyone particularly the big polluters and major emitters for ambitious emission reductions by 2030 and to implement commitments consistent with the 1.50C target. Phasing out of coal plants and fossil fuel subsidies and investments are indeed crucial”. Her Excellency was also noted the absence of the international maritime and aviation sectors at the conference and stressed the importance of collectively including these two sectors in order to meet the goals of the Paris Agreement.

On her country’s progression, she mentioned the completion and submission of the Tonga’s Second Nationally Determined Contribution (SNDC) and Tonga’s Long-Term Low Emission Development Strategies (LT-LEDs) to fulfill its commitment under the Paris Agreement. Tonga continues to use its National Adaptation Plan (Tonga JNAP2) in dialoguing with donors and partners to secure funding to implement adaptation actions to deal with the impacts of climate change. Financing, technologies and capacity building are means of crucial support to ensure effective implementation of climate actions in Small Island Developing States like Tonga. She elaborated the importance for Developed Countries to achieve the target for USD100 billion in climate finance per year by 2020, the importance for Conduct of Technology Needs Assessment and the deployment of the most feasible technology as well as capacity building for developing countries.

Her Excellency explained that ‘without the necessary support’, Tonga will be unable to implement concrete actions and achieve the goals set out in its NDC, LT-LEDS and JNAP 2.

Her Excellency concluded in her statement that “The survival of our children and future generation of our small and most vulnerable countries in the world to climate change impacts critically depends on decisions made here in Glasgow at COP26.”

COP26 commenced on Sunday 31 October and will conclude on Friday 12 November.